A group of witches in Russia have openly cast spells in support of President Vladimir Putin. 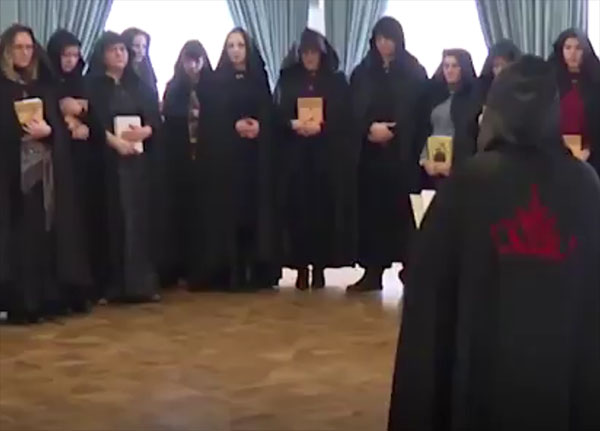 Image credit: Reuters
The coven, with a translated name of 'the Empire of the Strongest Witches' came together in a 'Circle of Power' last week. In the video, shared by Reuters, the witches can be seen to be dressed in black robes, chanting their spells in support of Putin and Russia.


“Come up with the greatness, the power of Russia, direct the way of Vladimir Putin right and correctly throughout the word of mine. Breathe, Mother Earth, embracing Russia on all sides,” head witch Polyn said, as translated by Reuters. “Oh primordial power, return to the abyss those who wish hate upon Russia," she continued. "May Russia rise and step away from grief and poverty, and may the coming days open the gates of happiness for Russia. All hail!”

The Empire of the Most Powerful Witches casts spells to silence Putin's foes -- and cashes in on the president's popularity. pic.twitter.com/2DGiaLGfc3


This wiccan support of Putin comes in stark contrast to reports from the US last year, whereby many American witches were openly casting binding curses and hexes against President Donald Trump. However commentators have been quick to point out that the Russian witches in question sell their magic online, and may be using the popularity of their president as a marketing tool.