Have you ever had the experience of seeing 11:11 or the same sequence of numbers over and over again? In this article we explore the mystery surrounding this phenomenon and ask what it might mean. 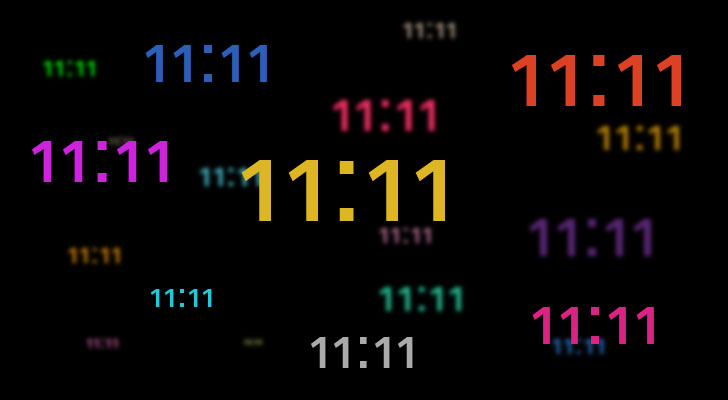 As a child in the 1990s, my parents decided to buy a new VCR that had a novel feature in that it could speak the time when a button was pressed on the remote. This resulted in endless hours of me repeatedly pressing the button until it drove my parents to insanity. The clock time I found most hilarious was 11:11 because of the way that the computer voice spoke. After that, I began to notice 11:11 everywhere, a strange symptom that has followed me ever since. Some examples can be seen below.

For many years, I thought I was the only person who experienced this. Then I was shocked to discover that it is actually a common phenomenon. Just a quick Google search of '11:11 mystery' will bring up numerous websites and examples of people who have experienced the same recurring pattern. It also appears that the experience is not just limited to 11:11. People also see other reoccurring sequences of numbers, seemingly tailored to them by some unknown force.

How many times have you glanced casually at a clock only to find that the time is 11:11?
So what does it all mean? Is it a message, a sign from the Universe, or just random chance? If it's a message, what does the message tell us? There have been many opinions, but few conclusive answers.

Spiritual humanitarian Simran Singh, who has gone as far as creating her own online magazine called '11:11 Magazine' said in a recent radio interview on 'The Unexplained with Howard Hughes' that the recurring number eleven lead her out of her 'dark decade of the soul'. In the interview, she says: 'I started to see the numbers eleven, one-eleven and eleven-eleven...on everything from license plates, to billboards, to addresses and store receipts, to bulldozers and trains and roller-skates and football jerseys. I started to discover a language that was being spoken by the Universe. It unfolded into being a language that shows up in front of us each and every day, especially in the mundane, especially in the simple.'

Uri Gellar, master of spoon bending and other unexplained powers has this to say on his website: 'I believe that people who have constant contact with the 1111 phenomena have some type of a positive mission to accomplish. It is still a mystery to me what it is that we all have to do or why are we all being gathered and connected together, but it is very real and tangible, I feel that it is immensely positive, almost like there is a thinking entity sending us these physical and visual signs from the universe. In me, it activates the power of prayer, love and determination to somehow help the world.' 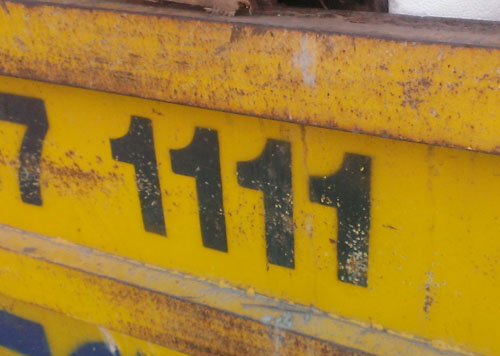 This 1111 appears on a skip just down the street from my apartment.
But could the number have a more sinister meaning? Some people see it as a sign of the end of days or the rapture, linked to the biblical passage in Revelation 11:11-12: 'But after the three and a half days a breath of life from God entered them, and they stood on their feet, and terror struck those who saw them. Then they heard a loud voice from heaven saying to them, "Come up here." And they went up to heaven in a cloud, while their enemies looked on.'

Similarly, there are connotations between the number eleven and death. Notable dates such as 9/11, or 'the eleventh hour of the eleventh day of the eleventh month' in 1918 when the hostilities of the First World War officially came to an end, are just two examples.

However, perhaps there is a more mundane explanation. The human brain is undeniably wired to see patterns in nature. The psychological term 'apophenia' refers to the human experience of seeing patterns or connections in random or meaningless data. This experience can also apply to numbers. The theory suggests that if you are looking for a particular numerical pattern, you will probably find it.

In addition, a strange mathematical quirk known as 'Benford's Law' shows that the number 1 will occur as the leading digit in any large data set around thirty percent of the time, while larger digits occur in that position less frequently. However, even this mathematical law remains somewhat mysterious. Mathematician Ted Hill has stated that, 'The widely known phenomenon called Benford's Law continues to defy attempts at an easy derivation.' 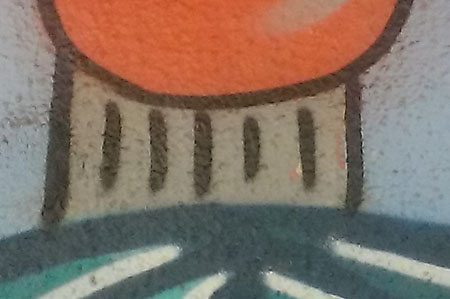 A section of a mural painted on an underpass near my home.
So can we come to any firm conclusions as to the true nature of the 11:11 phenomenon? Perhaps not, but it is worth noting that a common belief amongst scientists is that mathematics is a universal language - a concept that would need to be understood by any advanced civilisation. Cosmologist Max Tegmark has even gone as far as proposing that the Universe itself is a pure mathematical construct.

If this is true, then it would make sense that our reality would use numbers to communicate with us. And, if we are as much a part of this cosmological construct as our surroundings, then perhaps we can look to find the meaning of these signs within ourselves.