Could Aliens Be the Cause of Mystery Space Signals?


A new study by scientists has found that mysterious signals from space known as Fast Radio Bursts follow a mathematical pattern that is highly unlikely to occur naturally. Could the bursts be some kind of message from an extraterrestrial intelligence? 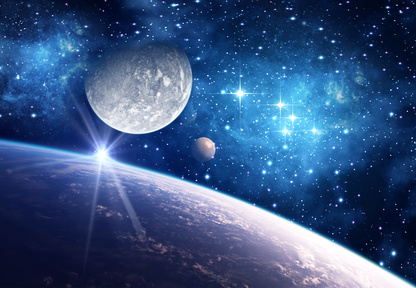 A total of ten Fast Radio Bursts (FRBs) have been detected since 2001, and their source has remained a mystery. The most recent burst made headlines last year when it was the first to be detected in real time, giving scientists a unique opportunity to study the phenomenon as it happened. According to New Scientist, the latest study has found that the chances of the mathematical pattern occurring naturally are around 5:10,000 (or 1 in 2000).

Michael Hippke of the Institute for Data Analysis in Neukirchen-Vluyn, Germany, and John Learned at the University of Hawaii in Manoa, have analysed the data for all of the signals detected so far, and discovered that the gap between the arrival of the first and last waves of each burst is always close to a multiple of 187.5, a pattern that is unlikely to occur in nature. The paper concludes that "An artificial source (human or non-human) must be considered."

So, could this finally be the welcome message from aliens that the world has been waiting for? It cannot be ruled out. Jill Tarter, former director of the SETI Institute in California says: “These have been intriguing as an engineered signal, or evidence of extraterrestrial technology, since the first was discovered. I'm intrigued. Stay tuned.”

However, before it is concluded that ET really is trying to get in touch, we first have to rule out all other possibilities.

In their paper, Hippke and Learned have suggested that these signals could still in fact be nothing more than misidentified man-made transmissions. In their outline, they state that the bursts seem to “arrive at close to the full integer second”, which means that unless the aliens also count time using seconds, the source is quite possibly man-made. In addition, New Scientist propose that the signal could come from “an unmapped spy satellite, masquerading as signals from deep space”.

However, it will be difficult to reach any firm conclusions until more signals are detected and studied. At the moment, scientists only have data from ten bursts to work with. Watch this space for further updates.