UFO disclosure and ET advocate Dr Steven Greer has refuted claims made by Stanford University that a six-inch-long skeleton dubbed the 'Atacama Humanoid' is merely the mummified remains of a deformed stillborn child, referring to the study as 'junk science'. 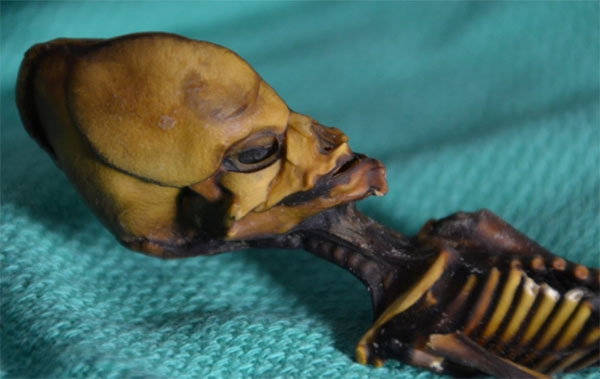 The Atacama Humanoid or 'Ata' for short was allegedly discovered in 2003 in the remote Atacama desert region of Chile. Dr Greer became aware of the specimen in 2009, and in 2012 was permitted by a Chilean exobiology institute to study the remains in further detail.

The studies were headed up by Dr Garry Nolan, a professor at Stanford University School of Medicine. After six months, the initial results suggested that the bones belonged to a child aged six to eight, and the apparent physical anomalies including small body size, missing ribs, and cone-shaped head, could not be attributed to 'any known human abnormality'. These results led to speculation that the being could be, at least in part, non-human in nature. However, more DNA evidence was needed for full analysis.

However, in March 2018, Dr Nolan published a further study of the DNA results in the scientific journal Genome Research, which appeared to reverse the previous analysis, concluding that the mummified body belonged to a human female stillborn child, with numerous genetic anomalies explaining the deformities. These results were published widely in the mainstream media.

Dr Greer has since refuted the conclusions of the study. In an open letter to Stanford University, he states that twelve scientists have looked into the paper and have concluded it as being 'junk science at its worst'.

Specifically, Dr Greer takes issue with the fact that the study apparently used no controls, intentionally left out key data, and made use of 'antiquated technology'.

He then goes on to accuse the institution of fraudulent behaviour, stating:


“Two PhD scientists with deep knowledge and expertise in DNA sequencing have assured me the study was faked from the very beginning and that the report could not have been properly peer-reviewed. Both have concluded that this is a case of massive academic corruption and fraud...

“If this skeleton represents a heretofore unknown species, we have lost a great deal to the advancement of science and human knowledge.”
Dr Nolan and Stanford University have not yet publicly responded to these comments.