2015 was another busy year in the world of UFOs, with many stories ranging from the fascinating to the absurd. Here is our round-up of the most prominent UFO and alien related articles from the last year.

President Obama’s Pilot Reveals UFO Encounter
In April, pilot Andrew Danziger, who flew Barack Obama during his 2008 election campaign, revealed that in 1989 he saw a ‘giant red ball’ flying parallel to his jet. He also suggested that ‘nearly all pilots believe in UFOs’.
Read more at: dailymail.co.uk

UFOs Seen Over Nuclear Power Stations in France and Belgium
Unexplained craft were spotted over several nuclear installations in France and Belgium in late 2014 and early 2015. In many cases these were suspected to be drones, flown by anti-nuclear demonstrators. Despite this assertion, the owners of these craft were never tracked down. Then, the director of a nuclear power plant in France, made a statement claiming that what was seen at his plant was definitively not a drone, but a UFO.
Read more at: huffingtonpost.com

The Roswell Slides
We can’t talk about 2015 without talking about the infamous ‘Roswell Slides’. Initially billed as the ‘smoking gun’ that would prove the existence of extraterrestrials once and for all, these slides turned out to be nothing more than photos of a mummified child in a museum case. 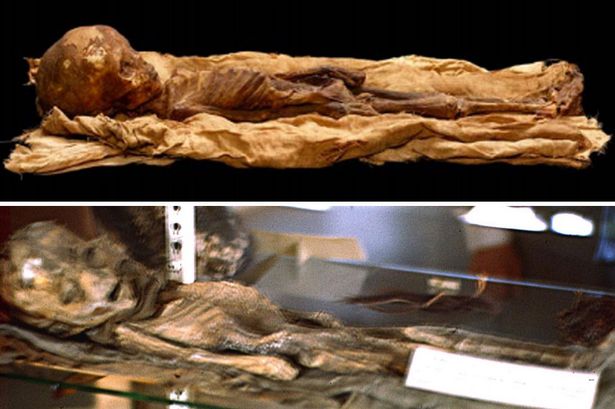 ‘Leaked’ Submarine Photos Show Strange Objects Hovering Over the Atlantic
These intriguing photos were reportedly leaked from the US Navy and were taken by USS Trepang submarine in March 1971. There is still much debate as to the authenticity of the photos and what they are actually depicting.
Read more at: mirror.co.uk

‘Leaked’ US Department of Homeland Security Footage Sparks UFO Debate
In August, the Scientific Coalition for Ufology (SCU), released a 161 page report detailing their findings of the footage, saying that the object in the video ‘exhibits characteristics that cannot be explained by any known aircraft or natural phenomenon’. The authenticity of the footage, and the true nature of the object, is still being debated. However, this remains one of the more convincing UFO videos of recent times.

University Team Find ‘Extraterrestrial’ Organisms High in the Earth’s Atmosphere
Researchers from the university of Buckingham have continued to release images of strange biology discovered in our atmosphere by their high altitude experiments. In September, they claimed to have photographed the first ever complete living entity that originated from beyond the Earth. As you might expect, their findings have been controversial.
Read more at: inquisitr.com

George Bush Senior Claims ‘Americans Can’t Handle the Truth’ When Quizzed on UFOs
During a fundraiser in 2015, a member of the public asked the former US President and CIA director when the government would reveal the truth about UFOs to the American public. In response, Bush stated ‘Americans can’t handle the truth’.
Read more at: pressexaminer.com

Astronomers Detect Stellar Anomaly that Could Be an ‘Alien Megastructure’
There was some excitement in October when astronomers studying data from the Kepler space telescope found a star that was dimming erratically. A number of prosaic explanations were proposed for this, but a more interesting theory was that the star could be surrounded by an artificially built megastructure. However, this theory was later dismissed by SETI scientists who found no evidence of signals emanating from the star. Although it is unlikely that this is an artificial structure built by aliens, a lack of signals does not completely rule out the theory.
Read more at: dailymail.co.uk

President Obama Quizzed on UFOs During TV Interview
When appearing on Jimmy Kimmel Live in March, the talk show host quizzed the President on whether he had tried to get to the bottom of the UFO mystery. Obama responded by saying ‘The aliens won’t let it happen’. Although his response was clearly a joke, some researchers have studied Obama’s body language to find out what he was really thinking. In a later interview in November, the President claimed that the truth behind the conspiracy theories was ‘disappointing’.

Kecksburg UFO Identified after Fifty Years?
In December, a new theory emerged regarding the famous Kecksburg UFO incident of 1965. Researchers suggested that the object that crash landed fifty years before in the woodland near Kecksburg might have actually been a General Electric Mark 2 Re-entry Vehicle that had been launched by the Air Force as a spy satellite, but fell out of orbit.
Read more at: post-gazette.com

‘UFO’ Witnessed Over Southern California
Hundreds of people flocked to social media in December when a bright object lit up the skies above vast areas of southern California. Although many people initially believed the object to be a UFO, the US government quickly debunked the idea by claiming that the object was space debris from a Russian rocket.
Read more at: cbslocal.com

Volcanic UFOs
Several photos and videos emerged during 2015 of UFOs and orbs appearing around volcanoes. Many of these objects remain unidentified.
Read more at the links below...
theblaze.com
express.co.uk
huffingtonpost.co.uk